A Band of Brothers

Across the UK in the past year, we have seen a terrifying rise in the number of violent crimes related to gangs, with ever increasing numbers of young men either being injured or losing their lives to knife and gun crime. Simultaneously, we have witnessed suicide become the highest cause of death among young men.

The cause of these parallel issues, and their linkage, is only now being examined, and we as of yet haven't developed a society wide approach that tackles the roots causes of these issues.

A Band of Brothers have a developed a programme that aims to do exactly this.

The EXceptionals attended a recent screening of A Band of Brothers The Movie, a film about their work, which presents their exciting new vision for a community that focuses on providing a framework for older men to guide younger men into manhood.

Nathan Roberts, the Chief Executive of A Band of Brothers, sees the organisation as addressing 'a group of young men that have led lives that up until now have not been successful', with the aim of trying to 'enable these young men to feel like they are a contributing part of a society that welcomes and includes them'.

For A Band of Brothers the solution involves looking back at aspects of our society that may have been lost in recent generations to understand what can be done to solve the crisis that is engulfing young men.

Fascinatingly, the innovative approach they have developed is one that pulls “from the ancient, something that has worked for thousands of years" – rites of passage led by elders for younger men.

A Band of Brothers found that many of the young men who were in need of support lacked a community of men that allowed them to cleanly and creatively express their anger and give them a space within which they can be vulnerable and grieve for things in their lives they have lost. This is exactly what Band of Brother provides.

Practically this is structured around a 12 week course, in which participants, both elders and youngers, work together to 'enable them through looking at their past to start envisaging a future that looks very different'.

The centrepiece of this is the call to adventure through a rite of passage weekend, the Quest. On this weekend, Nathan says 'we acknowledge society's failure to find a place for them thus far, and that if you want your life to be different only you can make that happen'.

On the quest, ten of the young men find themselves supported by around 30 men from their community. Nathan again says, 'They use that weekend to really look at the narrative of their lives, the stories that they tell themselves about who they are and what's possible for them'.

A key element of the Quest is emotional catharsis work. This involves exercises that aim to help the men express their anger in a controlled way, as opposed to suppressing it. What A Band of Brothers often witnesses are men who are ashamed or afraid to express their anger. However, A Band of Brothers work to 'help them to get to know it and use it in a positive way'. Ultimately, so that it is something they control and channel, as opposed to it controlling them.

Simultaneously, the aim is to break down 'centuries of conditioning, conditioning that men have to have stiff upper lips that, to show vulnerability is weakness, and we are now starting to see a new narrative emerge'.

Of the important role of these elders, one member of A Band of Brothers said that it is vital that the older man is not seen to be 'the shiny finished product'. The younger man gets to see him in his vulnerability, sharing what is difficult for him. Through this a 'trust bond is formed between the older and younger man. When they share what they are struggling with, when they see the struggle the man is having and they hear it as well'. 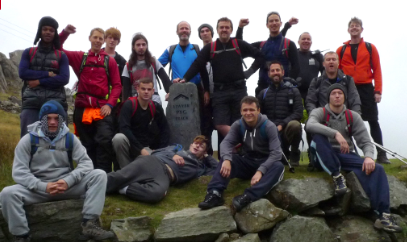 Many of the young men expressed that whereas before they felt those trying to help them were preaching to them, with A Band of Brothers the older members sat in the same place as them and shared equally, creating an environment in which one sees that 'these people want to help you, but for once they will open up to you'. Many of the men said that this relationship provided the bridge that allowed them to reshape their lives.

At the end of the 12-week programme A Band of Brothers have a Homecoming ceremony, with the aim of welcoming the men back into the community. At this point, A Band of Brothers have tried to build within these young men a 'sense of worth, sense of purpose, someone who feels good'. Vitally, they have also now developed a community of men they can properly express themselves around through the 'courageous conversations' they've had, which means 'the relationships of trust are solid'.

A Band of Brothers now aims to extend the reach of their work by building a national Rites of Passage centre from which they can hold their courses, and are actively seeking donations to build this.

The idea is to create a nationwide community 'of older man who hold them (young men) through a rite of passage experience, much as we did thousands of years ago' and this would help to remedy many of the issues that we are seeing plaguing young men at this time.