Belong was founded in 2010 by director Esther Wanjie. Working globally in a number of African prisons, she decided to use her expertise of issues within criminal justice and set up a charity in the UK to support those who have offended and been victims of crime.

The key areas in which Belong work in include restorative justice, mentoring, employment preparation and arts therapy. Their aim is to promote positive development, rehabilitation and recovery for those who are going through the criminal justice system.

The heart of the charity is to increase understanding about how a crime has impacted everybody involved. To help victims to recover, and those who have caused harm to take responsibility and move on.

As part of the Restorative Approaches in Prisons Project, Belong have developed paid Restorative Justice Representative roles within two prisons HMP The Mount and HMP Coldingley. These roles were advertised within the prison and the candidates were interviewed.

The nature of their offending background was taken into consideration in the risk assessment stage, following standard recruitment guidelines that every employer, both within and outside criminal justice settings, uses when recruiting new staff.

Successful candidates progress onto a five-day intensive training course.They meet with the Belong staff who work in the prison daily for coaching and mentoring help and guidance. The roles are overseen by Belong and candidates are paid directly by the prison. 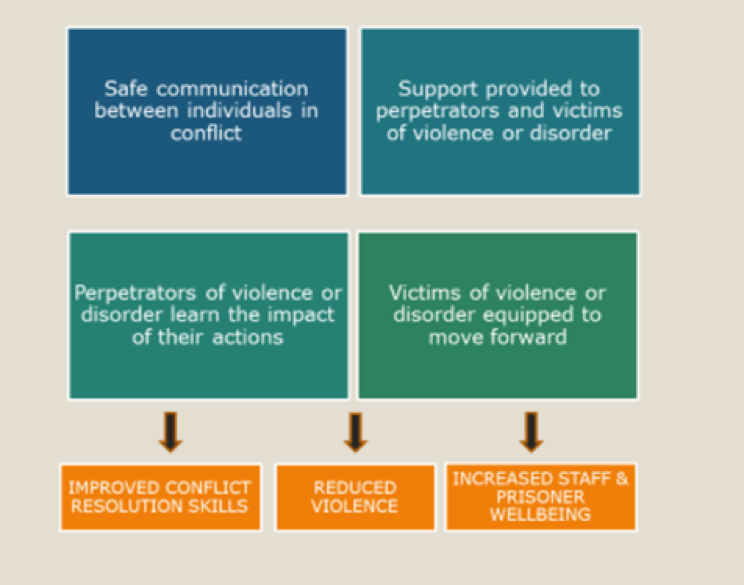 The Restorative Justice reps are at hand to diffuse conflict and provide ongoing support to their fellow service users, holding restorative justice conferences where necessary and highlighting the importance of communication as a means of understanding and resolution. The skills that they gain help build pathways to employment through-the-gate as they may choose to uptake a similar restorative justice role within a charity on release. The current candidates have been working for several months within these roles and are praised for their diligent, hard-working manner.

Service managers facilitate restorative approaches where there are assaults/threats by residents against prison staff or where conflicts are gang related, involve residents who are vulnerable due to mental health or disabilities, or have involved serious violence. By analysing behaviour among a sample group of service users pre- and post- intervention in 2017-2018, they found that service users who participated in Restorative Approaches achieved reductions in violence and antisocial behaviour, as detailed in the table below: 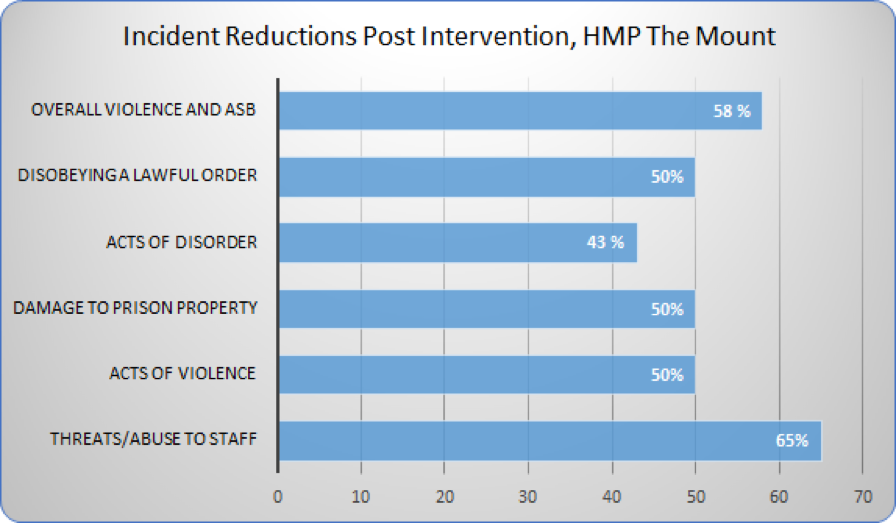 Focus on Lucas's* career journey as a Restorative Justice rep at HMP The Mount:

As soon as Lucas arrived at The Mount, work was important for him as he wanted to keep busy and use his time productively. Whilst working in waste management, he decided to do Restorative Justice training on the side and apply for the rep role.

He thoroughly enjoyed the management side of things and used his own experience to benefit others in peacekeeping and resolving conflict.

Typically, he will see around 4-6 people daily during the week. There are approximately 10 ongoing cases who he will visit weekly to check up on as they need ongoing support.

One case he recently worked through involved a fight. He saw both people individually and asked them about the situation, their thoughts and feelings, what had happened, the impact of this and what they wanted to happen now. He also consulted his manager from Belong before deciding to bring them both together in a neutral place to talk through the issue, confronting any emotional distress and ultimately ending in peace with a handshake. Without this meeting, their relationship would most likely be subject to further break down which would lead to more conflict. Instead, Lucas was able to intervene and help them work through and resolve the situation.

I really enjoy my job; it honestly couldn't be better. I'm busy all the time, there is never a day where there isn't people to see or revisit and check up on. 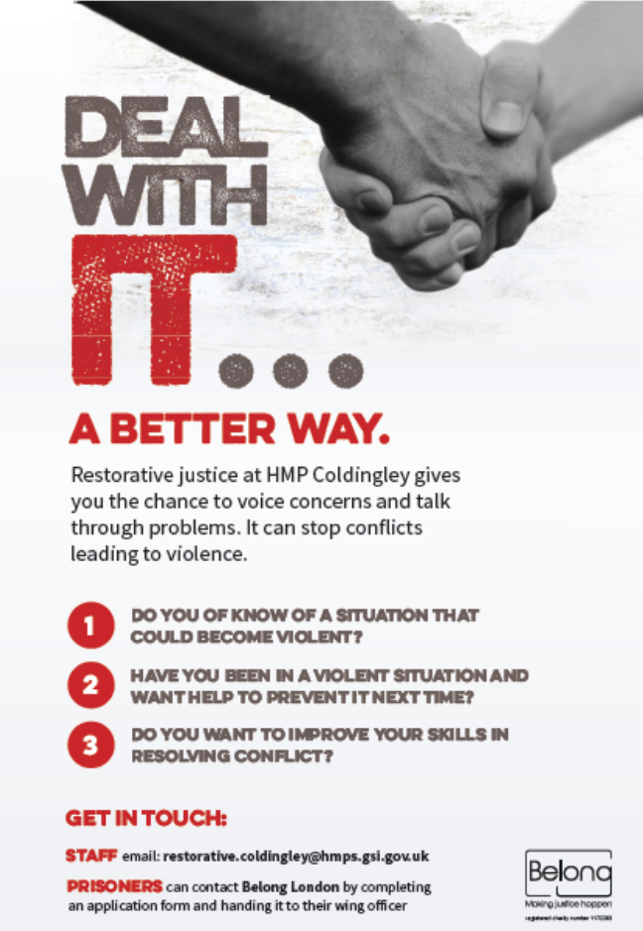 The one to one support was very useful and resourceful. I got good practical support and guidance - help with my CV, and a disclosure letter cover letter.

- a service user on PLAN A.

Belong also run several other programmes. PLAN A, which works with young males who have convictions for violent, gang-affiliated offences, is an innovative programme facilitating change by enabling harmers to engage with the three elements of art therapy, mentoring and restorative justice/victim awareness concurrently. Initially piloted at HMP/YOI ISIS in 2014. Their internal evaluation of PLAN A in 2016 revealed that an impressive 73% of programme completers increased their participation in education, training and employment during or after the programme.

Belong is different because we understand the importance of not giving up on somebody multiple different times. It's about helping people through crisis and giving them access to ongoing support, going back further and targeting the root causes of someone's offending. Belong believe in holistic, person-centred methods and providing tailored help.

Belong are currently recruiting for committed, compassionate volunteer mentors at HMPYOI Feltham, London. One-to-one mentors will work with males for 9-12 months, mainly those aged under 18 years, who have committed gang related offences and want to change their lives. Mentors will build a professional working relationship, focusing on education, training and employment, with young people as they serve their custodial sentence and prepare for release into London communities.

The one-to-one mentoring looks at working toward positive recovery and engagement. Candidates may build up their budgeting skills, practice interviewing, draft a high quality CV and disclosure statements, learn how to access suitable housing, engage with job or higher education applications, learn emotional coping skills and strengthen their self-esteem and confidence.

Please see their website for more details or do get in touch via our directory if you would like to get involved.

As an inclusive employer, Belong welcome applications from those with lived experience of the criminal justice system in both their paid and volunteer positions. Please look out for future paid of volunteer vacancies via twitter, linkedln and other social media. 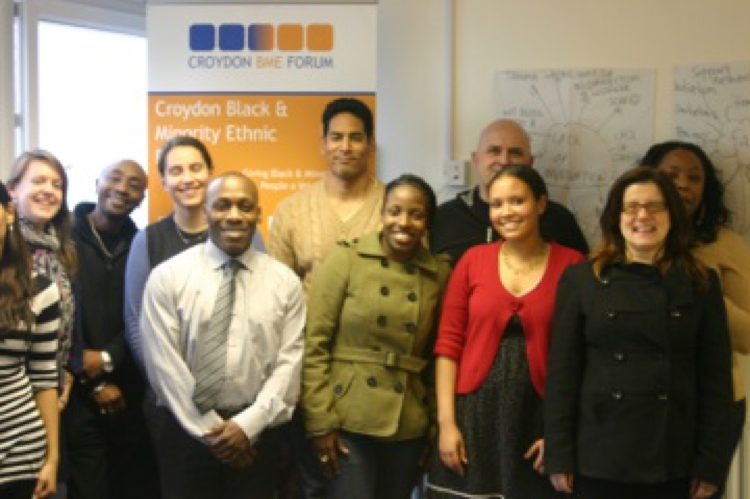